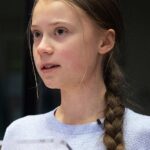 Greta Thunberg is a swedish climate activist who inspired an international movement to fight climate change.

She began a global movement by starting a school strike for the climate outside the Swedish Parliament in August 2018. She started a movement called Fridays For Future.

In May 2018, Greta’s essay about climate change was published in a Swedish newspaper.

In September 2019, Greta led the largest climate strike in history.